2019 fundraising challenge: Rob made it (after a detour!)

Another year’s fundraising challenge at Hunter, Aitkenhead & Walker has been completed, after a few detours!

First, I’d like to thank everyone who has already donated. With £1,900 (once last week’s cheques have been added) already donated, we’re well on our way to raising £2,500 for the Muscular Dystrophy Support Centre. This incredible charity provides specialised physical therapies for people with neuromuscular conditions. If we hit our target, we’ll have provided around 1% of the group’s financial needs for the next year and help them to continue to provide valuable services.

This year, Rob took up the fundraising challenge mantle, deciding to embark on a Devon Coast to Coast cycle. I’m pleased to say that he successfully completed the 160km ride from Ilfracombe to Plymouth, although it wasn’t without a few mishaps; I’ll let Rob tell you about that.

If you’d like to get involved in this year’s charity fundraiser, there’s still time. You can sponsor the challenge through our Total Giving Page, with all donations going to the Muscular Dystrophy Support Centre, here: https://www.totalgiving.co.uk/mypage/ha-w

If you’re a taxpayer, making a Gift Aid declaration means the charity will be able to claim an extra 25p for every £1 you give.

Thank you for your support,

The bike ride got off to a great start, it was mild and sunny, perfect cycling conditions. Unfortunately, it turns out I’m a terrible navigator. Heading off from the Damien Hirst statue at the entrance to the harbour in Ilfracombe, I started in the wrong direction getting about 5 kilometres before realising the mistake, which was pretty much the story of both days. 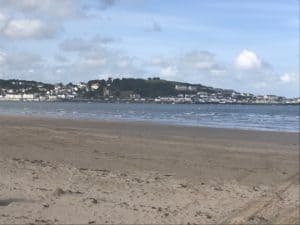 I did eventually made it onto the Tarka Trail that boasts a mix of beautiful countryside and coastal views, including over Appledore. For long stretches, the only signs of life were sheep and it’s partly on disused railway tracks, so there was plenty of nostalgia along the way. There was plenty of climbing, starting with easy gradients on the tracks and trails and ending with much steeper road sections with lots of first gear out of the saddle grinding.

Day 1 ended at Okehampton, which rewards you with an endless steep climb up to the old steam station and the start of the Granite Way. All in all, the first 100km (well, 100km in the right direction; I have no idea how far I actually rode) took four and a half hours.

At breakfast, the café’s Christmas display was timely, as it appeared winter had arrived in Devon that morning with a huge temperature drop and heavy rain. 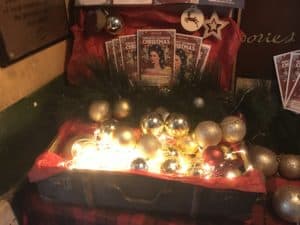 In theory, this should have been the easier day, there was just 60km left and the navigation looked easier; it wasn’t. I took more wrong turns than right ones and found it really hard to make progress in the right direction in the rain and gloom. Luckily views of the moors were stunning and there were impressive viaducts to ride over, so it wasn’t all bad!

By the end of the ride, both my waterproof layers had soaked through and there were a few off-road sections I had to jog as it was impossible to stay upright on the bike (which at least warmed me up for a few minutes). As the end drew closer, I got cold and tired, making more navigation errors. So, what should have been a shorter day took over four hours.

After a hot shower and great dinner in Plymouth, I started to see the funny side of my Mr Magoo-esque inability to read signs! 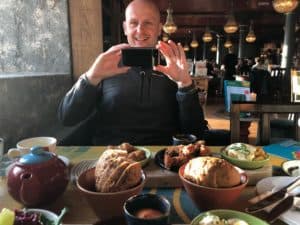 A huge thank you to everyone that has already donated.